Mission to 7 schools in Baglung district.

A great library mission has just been completed.

I am VERY grateful for the students and the teacher , Elisabeth Hareide Skjønhaug, who made this possible. A gift from one school to another !

Hilde Haugen from Sandefjord, Norway, has collected funds from friends and it resulted in 2 new libraries! EFL was lucky to have her in Nepal with us, so she joined Meena on this mission.

She has put words to her experiences and its a joy to read her vivid story. All pictures below are hers;

“Dear Education for life, friends and donors,
You are making a huge difference for the Nepali children! I´m so impressed by the work that Meena, Renuka and Øydis are doing with the help of generous donors. This is my story from their last mission.

As a volunteer I had the pleasure of joining Meena on this week´s mission to remote schools in the Baglung district, in the western part of Nepal. With the Karma Flight jeep filled to the top with books, stationaries and reusable sanitary pads we left Pokhara early Tuesday morning heading for Baglung. For the first time in weeks, the weather was sunny and warm. We picked up Bishnu and another Meena, two local nurses on the way. The roads in Nepal regularly crop up in articles featuring the world’s most dangerous roads; roads that you should think twice about, then thrice more before embarking on. It´s not underrated! They are under-developed, many roads are in poor dilapidated conditions, full of potholes, cracks and crevices. We frequently found ourselves litterally on the sides of half carved out mountains with steep hillsides just centimeters from the jeep´s wheels. Looking down made me sick to my stomach. I actually removed my seatbelt and held my hand on the doorhandle, ready to jump out if we would tip over. And when it comes to road ethics…. Well, let’s just say things are done differently in Nepal. Even so – most of the time I felt safe with our experienced and excellent driver, Yam. Finally, after an eight hours bumpy ride we reached the village Arnakot. From the summit we have a stunning 360 degrees view down each valley. We even get a glimpse of the snowcapped Himalayas. This is the rural Nepal and I get the term remote now. The people living here have to walk at least 2-3 hours to get to the nearest city. It´s a tough life. Parents send their kids to school. Some of them walk for hours to get there. Every day for several years. When they finish primary school, it´s ofte even further to go to get to school and finish their education.

Our first task on this mission, was actually also in co-operation with Nepal Ease. We were to talk about all the tabus around menstruation which still excists in these societies and teach them the true story. We were also to hand out bags with reusable sanitary pads. Around 70 young girls and women waited for us in one of the classrooms in the school. Sitting on the floor. Some already embarrassed. Meena and Bishnu, the two local nurses, spoke about the natural process in the female body and proper hygiene during the menstruation period. Meena showed them how to use the pads and explained how to wash them. It was so interesting to observe the young girls and the different expressions in their faces, which ranged from interest to shock and disbelief. Some giggling. Hiding their faces in their scarves. They had very few questions – until after the presentation. Then they came up to us, individually, shy and curious. It was a completely different group of girls and women who left the school than met us just a few hours earlier.

We stayed the night in Arnakot, sleeping in the attic of the house of a local family. Dinner was served in the dark kitchen, sitting on mats on the floor. Early next morning Yam, Meena and I headed for our next project in an even smaller and more remote village, called Huldi. The mountain air was fresh and crisp and it was still sunny. I was thinking it had to be good karma!

We had to go all the way down the steep, bumpy, narrow road clinging to the mountainside to get to the nearest city, Burtibang before we continued our mission to Huldi. On the way we stopped and unloaded our luggage in our accomodation for the next night and picked up the head teacher of Shree Rasasnand Primary School, who usually walk an hour and a half every day to get to work. We passed a lot of students on the way. Smiling kids. Waving happily. Staring curiously into the jeep. The road became more and more narrow and when it was not possible for the jeep to go any further, we stopped and unloaded all the stuff that was meant for this area. A group of students were watching us, offering to help. They were allowed to carry some of the ligher stuff. Some young men came, strapped the heavy boxes to their back and head and set off up the path in the steep hills. We all followed. I was struggling to keep my balance even in hiking boots. The kids from the age of four or five, run lightfeet up the slippery, muddy path in the steep hillside. Most of them only in sandals. Their school uniforms were dirty and worn-out. Their hair messy and half braded. You could easily tell that this is a very poor area. Many of them are low-cast. Yes, the cast system is still effective – even if it´s officially not!

After approxemately 20 minutes, we arrived Huldi and the Shree Rasasnand Primary School. Being tall, blonde and the first tourist there I suddenly became the center of attention. The students stared at me – and it was difficult to make them smile at first. Little by little they came closer and tried to communicate in Nepali. Body language is universal and always working when other communication fails.

EFL had actually already finished a few projects in this school, which has appx 180 students from pre-school to class 7. They have had their books, stationaries and two new toilets here. This time we only brought a few additional stationaries and money for the bookshelves in the new library, which is to be buildt from donations from EFL. The many boxes of books, posters, games, stationaries were for four other schools in the area. Due to their location and difficulties in accessing them, Meena made a deal with them to come to the Shree Rasasnand school and get their donations there.

Together the schools had prepared a ceremony as we were royals! We were blessed with the traditionally sindoor (vermillion) power, a red mark in our foreheads as symbol of good luck mark of celebration. They put flower bands over our heads. A student had prepared a traditional, graceful dance. All the five head teachers held long speeches thanking us over and over again. Meena and I said a few words, telling them about EFL and trying to inspire them to stay in school. Even if all these five schools are public, The Government doesn´t care. As mentioned these people are very poor and many of them are low cast. So this is about even more than just to be given books and necessary stationaries. It´s also about the feeling that someone actually cares about these people in the truly remote areas. EFL is the only organization that has done that!

It´s hard to leave – especially when the students finally are used to me and would interact. But we have two more stops before we are finished for the day. Balendra Malla, one of the head teachers went with us. We walked down to the jeep. Somehow Yam had managed to turn the jeep around. Our next school had already called Meena several times. They were excited! It took us another half an hour to get to the village Kalnechour and The Shree Janahit Primary school with it´s 140 students. This time it was only a few minutes walk from where the jeep stopped to the school yard. The students were lined up. Patiently waiting. Standing straight and proud. The greeted us with applause. Same procedure with the blessings, the red mark, more flowers and speeches. Mina and I said a few words. The students were so excited by the books! We opened a box and suddenly they were all around us. Everyone wanted to see! We took some pictures before it was time to move on to the village Yangmang, our last stop of the day.

This time either Meena, Yam or Balendra Malla knew our final destination. None of them had been in this area before.The roads – well, it was actually more like wide paths in some parts – were worse than ever! Clock was ticking. The view became more and more stunning. We stopped several times to remove rocks and trees which blocked the roads. Finally there was a rock the size of a small suitcase, not possible to move. That was the end of the road. It took as twice the estimated time to get there. The head teacher from Shree Surya came to meet us together with three teachers from his staff. They were smiling from ear to ear and we could feel the warmth from their hearts.

The climb up to the school was estimated to five minutes. Well, it was more than 15! And I consider myself to be in good shape. In the middle of the steep hillside, a white building was clinging to it. That was the school. In front the around 60 students stood lined up, greeting us Namaste. They were so polite and well behaved. They had been waiting for us the whole day. We were late and the school had finished. Still they were standing so patiently. They were obviously the poorest of all our schools, telling by their clothes and looks. Very few of these student even had a uniform.

The program and procedure were as in the other schools, only this time the head teacher actually held his speech in English. Clouds darkened, we could hear the thunderstorms and see the lightning, so we had to rush to the car to get back down to Devisthan. Unfortunately we had a very stort time to interact with the students in Shree Surya and we didn´t have time to explore the books and stuff with the them. This time they had to do that without us.

It was almost dark when we arrived in the house of Meena´s parents, where we stayed the night. Early next morning we headed back to Pokhara. Another eight hours of bumpy ride and core training. To keep your body straight and not jumping all over the car, takes a lot of strength and exercise, I´ll tell you! I´m so impressed by Meena and her collegues, who have done more than 70 of these trips during the past six years. They truly know how to find the remote schools. Schools that have little or no other support than the one from EFL and you guys!

As a teacher in the Norwegian public school for 25 years, I can hardly imagine teaching without any books or stationaries. Textbooks, notebooks, pencils and pens are basics. Having posters, boardgames, and other concretes will help students to understand easier and make learning more interesting and fun. I´m passionate about education and every child´s right to get one. Education is the key to a better life and maybe the only way especially the children in these remote areas actually have to change their life. These kids also have dreams about becoming doctors, nurses, engineers, pilots or even teachers.  «Education for life» is helping them fullfill their dreams and to change their lives! 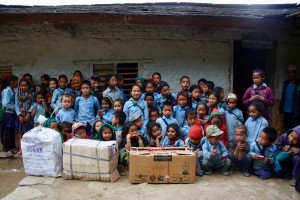 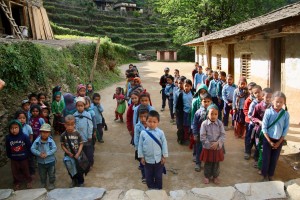 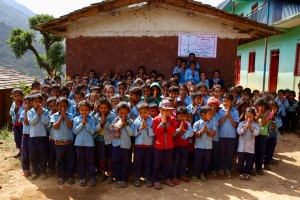 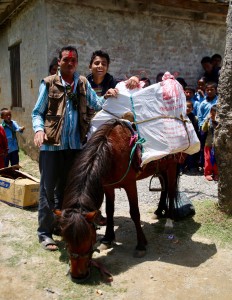 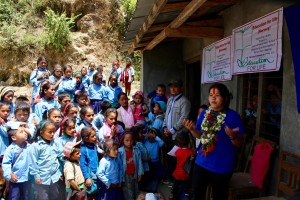 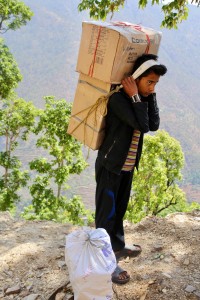 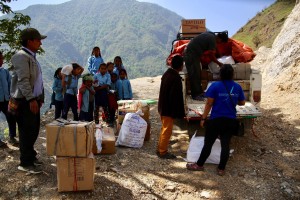 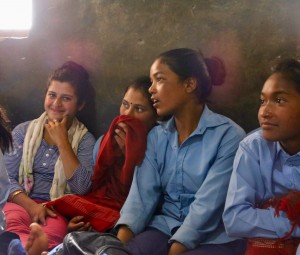 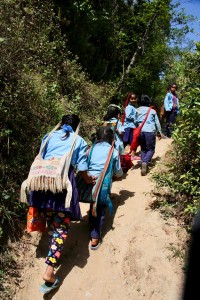 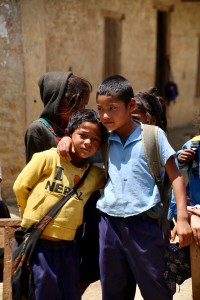 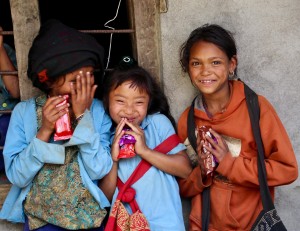